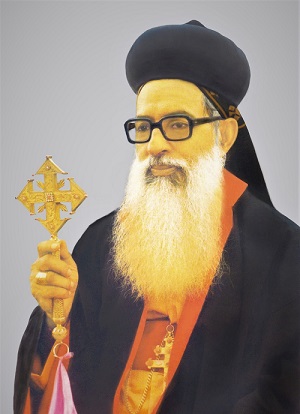 Archbishop Benedict Mar Gregorios was the Second Metropolitan Archbishop of the Syro-Malankara Catholic Church. The Archbishops baptismal name was Geevarghese. His family members used to call him Kunjukutty. He was born on 1 February 1916 in the Mundupalathinkal-Thangalathil family as the second son of Idicula and Annamma, at Kallooppara, Tiruvalla, in the District of Pathanamthitta, Kerala, India. After completing his primary and middle school studies he joined the St. Johns School, Eraviperoor, for his Secondary School education. It was at this time that the Metropolitan Mar Ivanios started many Bethany churches with the intention of reforming the Orthodox Church, and one among them was located near the Thangalathil family. As a result of that Geevarghese, who had an inclination towards ascetical life, was able to maintain a good relationship with the Bethany Sanyasis. Very soon, the reunion of a part of the Malankara Church with the Catholic Church became a reality under the leadership of Metropolitan Mar Ivanios. On 21 November 1933, Brother Geevarghese entered the novitiate.

He assumed the name Benedict, which means blessed, and on 15 August 1935 he took his temporary religious vows (profession) before Archbishop Mar Ivanios. After his Minor Seminary studies, he was sent to the Papal Seminary at Kandy (Sri Lanka),for his priestly studies.

He made his perpetual profession on 24 August 1941. Most Rev. Regno, the Bishop of Candy ordained him priest on 24 August 1944 and he celebrated his First Holy Qurbono in the Seminary Chapel. After his return in December 1944, Archbishop Mar Ivanios appointed Fr. Benedict to teach Syriac at the St. Aloysius Minor Seminary. He joined St. Josephs College, Tiruchirapally, in 1946 for graduation course in Economics and passed the Degree with first rank from the University of Madras in 1949. Then he was appointed the first Principal of Mar Ivanios College. In 1952, he was elected Bishop. He was ordained Remban in the Archbishops House Chapel on 27 December 1952 and made Auxiliary Bishop of the Archieparchy of Trivandrum after the name Mar Gregorios. He became the Archbishop in January 1955.

He received Pallium, on 14 May 1959. He dedicated his priestly life to the service not only for the Malankarites or Catholics alone but for the human society in general through his ministry. He left his ineffaceable marks in the social and religious psyche of India. During times of social calamities and religious instability he was sought after to reinstate peace and harmony in society. He was a champion of religious harmony. He had proved his expertism in social, educational and economical fields of Kerala and was appreciated by all irrespective of caste, creed and religion.

In a meeting held in 1994 to appreciate and congratulate Mar Gregorios on his Saccerdotal Golden Jubilee, Mr. K. R. Narayanan, the then Vice-President of India complimented that Mar Gregorios is a World Citizen and perfect example of secularism of our country. He had keenly attended all the sessions of the Second Vatican Council extensively contributing to its richnes. He had strongly asserted during the discussions on the Dogmatic Constitution of the Church In the Modern World that the developed countries must help developing countries not merely out of charity but out of justice.

The various projects he initiated for the elevation of the poor produced plentiful fruits and they were well recognized and appreciated by the society. The world has witnessed the presence of the Malankara Syrian Catholic Church through Archbishop Mar Gregorios and flourished in strength and vigour during his sovereniety. Forty one years of service in the Church came to an end on 10 October 1994 and his mortal remains rest adjacent to the tomb of his predecessor and master Archbishop Mar Ivanios, the Servant of God.